From crackers and sanitation kits for America’s fallout shelters during the Cold War to COVID-19 supplies so direly needed in every state and town, one defense organization has the power to provide essentials in the nation’s time of need.

The Defense Logistics Agency was created in October 1961 to manage common goods for the military services. Its worldwide network of supplies, distribution assets, and contracting experts has supported US troops in peace and at war. And though “DLA” may not yet be a household name, it’s touched American lives through whole-of-government support that stretches back to the agency’s roots.

“DLA’s work has always been tied to the greater American story. There’s very little the nation has done where we haven’t had some supporting role,” DLA Historian Colin Williams said.

Fallout shelter supplies were the first items DLA bought for use by the American public. Fear of a nuclear attack was so real the agency assembled medical kits and stockpiled supplies in caves in the Allegheny mountains.

“We kept them for so long we had to set up an inspection schedule to ensure shelf-stable foods really were shelf stable,” Williams said.

The agency went on to source the antenna that broadcast man’s first walk on the moon. And when gas shortages and steep prices during the 1970s energy crisis ignited strikes and families ran short of heating oil, DLA brought stability by using the Defense Production Act to order large quantities at better prices than those available to the general population.

American companies that wanted to send free goods to troops in the Gulf War also got a hand from DLA when it partnered with companies like Nabisco, Mars Inc., and USA Today to palletize and ship Oreos, M&Ms, books, newspapers, and more.

DLA support was so vital to the months-long recovery following Katrina that the agency created contingency contracts to respond to FEMA requirements for humanitarian aid in future disasters.

“Katrina really put DLA on the map when it comes to supporting the nation in a crisis,” DLA Vice Director Brad Bunn said. “By bringing commercial supply chains together with our organic distribution capabilities, it became obvious we were able to deliver supplies wherever they’re needed and, frankly, at a reasonable cost because of our ability to leverage large-scale buys.” 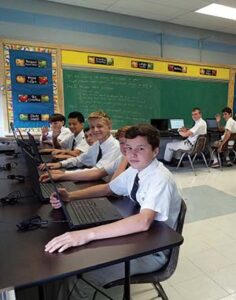 America’s schools have been helped by DLA, too. Through Computers for Learning, pre-kindergarten and grade-school classrooms are furnished with laptops, monitors and keyboards considered excess by the Department of Defense (DOD).

Fresh fruits and vegetables are also sent to school kitchens across the country through DOD’s Fresh Program, a partnership between DLA and the US Department of Agriculture that also supports US farmers. When COVID-19 closed schools, DLA helped provide produce to students’ families. And a similar program allows the agency to put fruit, vegetables, and eggs on the dining tables of low-income Native Americans.

Homeless veterans get a lift from the agency, as well. DLA Disposition Services holds hundreds of annual events around the nation to distribute boots, parkas, sleeping bags, towels, cold-weather gear, and other items.

Even American small businesses have flourished from DLA support. In fiscal 2021, over 7,000 small businesses including those owned by minorities and service-disabled veterans were awarded contracts worth $13 billion, putting money back into local economies.

DLA has also been a pillar in the US government’s response to COVID-19. DLA Troop Support provided gowns, gloves, test kits, and more for nursing homes; masks for local community centers; ventilators and medical supplies for hospitals; and protective equipment to replenish the Strategic National Stockpile.

DLA Energy Deputy Director Dave Kless, who served as DLA Operations’ Executive Director from the beginning of the response until June, said DLA’s reputation for helping the nation during natural disasters made it an obvious solution for sourcing hard-to-get materials.

The need for some supplies was so urgent that many missions went from concept to execution in less than a week, he added, attributing the agency’s success to employees “just doing what had to be done for the good of the country.”

“We will be captured in every after-action report as a success for being able to step in and provide the capabilities that the other government agencies didn’t have internally,” he said. “DLA was able to step into that gap and support the entire United States, and it’s not often that you get to say that.” 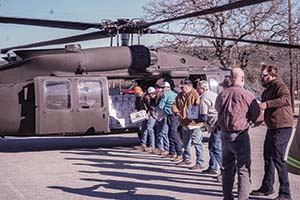 Even as DLA worked to deliver vaccines to overseas employees, it equipped wildfire responders with everything from chainsaws to fire hoses as they fought fires sprawling across millions of acres in numerous states. And in February, the agency supported Texas residents with food and fuel during record-breaking snow and ice that brought multi-day power outages.

Such support is possible and continues to grow partly because of DLA’s alliances with industry, Bunn said.

“DLA is an enormous machine of procurement and logistics so capable at large-scale support that when there’s a requirement that expands beyond DOD, it makes sense for the country, the federal government, the White House, and Congress to look to us as a potential solution,” he added.

The nation’s growing reliance on agency capabilities like procurement and distribution suggest the role is permanent for DLA, Bunn continued.

“I think in the future we’ll be seen as thought leaders and consultants on how to best replicate some of these functions, even if we continue to support in areas of our core competencies,” he said.