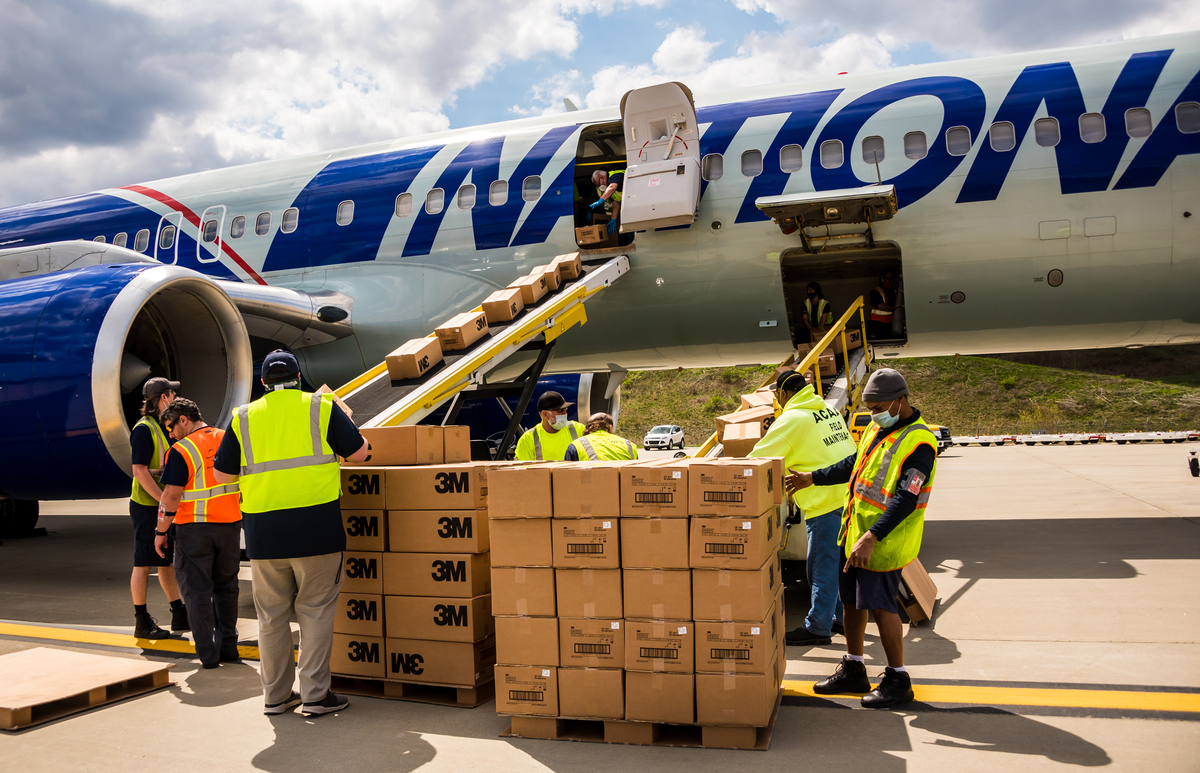 A second cargo flight carrying much-needed medical supplies for the Federal Emergency Management Agency touched down in Pittsburgh on Monday, as shippers look to respond to the need for medical supplies in the United States during the COVID-19 pandemic.

The first National Airlines plane arrived Saturday from South Korea after a brief stop in Anchorage, Alaska. The repurposed passenger Boeing 757 jet carried nearly 150,000 N95 masks, which were offloaded and placed onto a truck just over an hour after landing. The masks will be distributed through the federal government nationally to hospitals, nursing homes and other high-risk facilities.

National Airlines officials said they have been working closely with the government and international companies in the global effort to fight COVID-19. Working with federal authorities, the airline said it is using all available resources to support front-line responders.

“The world is in turmoil dealing with the outbreak of coronavirus, and our company is playing an extremely critical, key role in the sustainability of the world population,” said Chris Alf, chairman of National Air Cargo Group Inc.

Airline officials said their fleet of cargo Boeing 747s have completed numerous flights in recent weeks, bringing supplies to destinations across North America. With the current high demand, they also dispatched their passenger Boeing 757s to carry critical cargo to the United States.

Cargo has increasingly become part of Pittsburgh International Airport’s business plan as officials look to build the airport into an international logistics center, capitalizing on its abundant space and ideal geographic location.

“The secret we have at Pittsburgh International is the speed, whether it’s the short aircraft taxi time on the airfield, the time it takes to offload cargo, or to build up and break down the freight that goes on the trucks,” said Bryan Dietz, Vice President, Air Service Development at PIT. “The speed of how this airport community keeps freight in motion gives us a competitive edge.”

While airlines have slashed flights and passenger traffic has dropped to a fraction of normal times during the pandemic, cargo has remained steady. Airport officials said a surge in e-commerce has helped fuel cargo shipments on FedEx and UPS planes.

At the same time, freighter services that typically fly into larger cities like New York or Chicago are looking to diversify their options.

“As an importer, when you’re looking to bring cargo in, you’re looking for two things – speed and cost. Pittsburgh offers both,” said Pittsburgh-based cargo consultant Nathan Hankinson. “The infrastructure at PIT is a bit unique. There’s more land and space than most airports can offer. You don’t face the typical congestion that you have in the Northeast at other airports, which allows for faster velocity.”

Plans for cargo expansion at Pittsburgh International received a major boost in the fall when the U.S. Department of Transportation announced an $18.69 million BUILD grant to support the construction of a 75,000-square-foot cargo processing facility and an adjacent surface parking lot to expand air cargo operations.

Dubbed the Cargo 4 Project, the new building will allow for larger aircraft, new cargo destinations on all-freighter aircraft, or additional parking for integrator carriers like FedEx or UPS that require sorting facilities and high volumes of truck access. Airport officials said current cargo capacity in the existing three buildings will be full in the near future.

“Our federal officials have been very supportive of PIT’s emerging growth in cargo and recognize the airport as part of our national critical infrastructure,” said Vince Gastgeb, Vice President, Government and Corporate Affairs at PIT. “The efficiency of our operation and cargo loads the past few days reflect that. We are continuing to work with our federal partners to expand the relationship with governmental organizations such as FEMA.”