The 2019 NDTA-USTRANSCOM Fall Meeting took place October 7-10 at the historic St. Louis Union Station Hotel in downtown St. Louis, Missouri. The theme for the event was “Fostering Partnerships to Preserve Peace and Prevail in Conflict…Then, Now and Tomorrow.” This theme acknowledged that we are operating in a rapidly changing, multi-domain, contested environment that we must understand and be prepared for to enable the support rendered by the transportation and logistics industry for our armed forces, allies, and partners.

More than 1,500 professionals attended the Fall Meeting. These individuals included a cross-section from military, government, and industry from all facets of logistics, transportation, travel, distribution, and related industries.

The meeting’s professional agenda included keynote speakers, roundtable discussions, and educational classes. The impressive lineup of speakers and instructors during these events included experts and leaders in their fields who challenged, informed, and motivated the audience.

Thoughts from Our Senior Enlisted Leaders 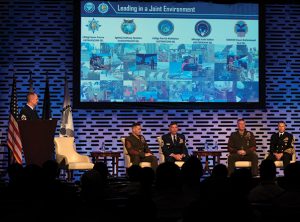 Each panelist gave a brief introduction to their organization, followed by an extensive question and answer session with the audience. A common thread in their opening remarks was an emphasis on the importance of the relationship between the military and their industry partners.

USINDOPACOM is the largest combatant command and, as such, has a big area to protect from threats. According to CSM Spadaro, a robust industry is needed to address these threats. Likewise, cyber is a unique and challenging area requiring protection from threats, which MGySgt Stalker stated must be addressed through the Department of Defense’s (DOD) industry partners. He also encouraged everyone to adopt the mindset that computers are a warfighting domain.

CMDCM Brahmsteadt agreed, stating that DLA’s motto of “Warfighter First,” could not be accomplished without industry. For CMSgt McMahon, the men and women of USSTRATCOM along with their partners, give the command a distinct advantage.

The Challenge to Think Big

“We can only preserve peace if the enemy knows that we will prevail in war,” he asserted. The question then becomes how to prove we can prevail to the level necessary for deterrence. To do this, DOD needs to define what it wants to accomplish and work backward toward that goal. Mr. McMahon encouraged the audience to let their imaginations run wild on how to achieve these goals, not allowing past experiences to dictate future actions and innovations.

Cybersecurity is one of the greatest challenges faced by DOD and its partners, and the panel members provided a comprehensive overview of those challenges.

The Connection Between National Security & Transportation

Department of Transportation (DOT) Secretary Elaine L. Chao pointed out the close ties between national security and national transportation planning. And, she noted, this is one reason DOT works hard to ensure our nation’s transportation system is safe, effective, and resilient. 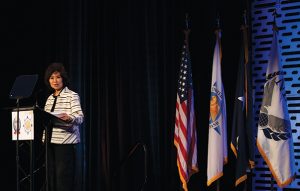 Three main priorities guide DOT’s efforts. The first—and always first—is safety. The second is rebuilding and refurbishing our country’s infrastructure. This is vital to our country’s productivity, economic vitality and quality of life for everyone. The third is preparing for the future by engaging with emerging technologies to address legitimate public concerns about safety, security, and privacy, without hampering innovation.

DOT distributes about $65 billion tax dollars annually in infrastructure funding and technical assistance to state and local governments to improve infrastructure. Many of these grants are for intermodal projects which combine railways, roads, waterways, and airports. Delivering goods from the farm or factory to the foxhole requires a multi-modal transportation system.

Regarding the maritime industry, Secretary Chao stated that the Maritime Security Program (MSP) ensures that American-flagged vessels are available for service. Congress is looking at potentially increasing the amount paid per ship, and establishing a sister program, called the Tanker Security Program, that would involve ten tankers. In addition, the Ready Reserve Force (RRF) has 46 vessels that can be activated for use when needed. The RRF provides nearly 50 percent of government-owned surge sealift capability. But concerns exist over the age of the ships and other issues.

Ports are another concern. The Port Infrastructure Development Program should deliver nearly $300 million of new grant funding to help strengthen, modernize, and improve our country’s maritime systems and gateway ports. In addition, $20 million in grants were issued to support capital improvements and employee training at 28 US small shipyards as a part of the small shipyard grant program.

Aviation is also getting help, with a recent announcement by DOT of more than $986 million in Airport Improvement Program grants. The improvements include taxiways, runways, aprons, and other critical infrastructure projects. These improvements are improving aviation safety and reducing delays.

Other grants have benefitted railways, which play an important role in defense transportation. $326 million has been awarded under the Consolidated Rail Infrastructure and Safety Improvements (CRISI) program and the Special Transportation Circumstances program. In August, the Department also awarded $272 million for the Federal Railroad Administration’s State of Good Repair grant program.

DOT is also working on the issue of transportation worker shortages, taking action to make it easier to become Merchant Mariners, truckers, and pilots, especially for those who may have relevant military experience.

One of DOT’s top priorities, innovation, ranges from new materials such as ultra-high-performance concrete to new transportation systems such as autonomous vehicles. Innovation is changing the way we live and travel, said Secretary Chao, and will affect defense transportation too.

USTRANSCOM’s number one priority is warfighting readiness, said its Commander, GEN Stephen R. Lyons, USA. He described the command’s purpose, “to project and sustain military power globally at our time and place of choosing.” This ability is a strategic comparative advantage unparalleled by other nations and is inextricably linked to USTRANSCOM’s industry partners. 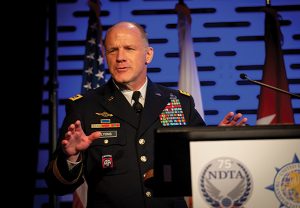 The reemergence of great power competition has influenced DOD strategy and holds significant implications for the Joint Deployment Distribution Enterprise (JDDE). “The warfighting function of sustainment and logistics must be successful under persistent all-domain attack,” said GEN Lyons.

He also addressed the cyber domain, stating that adversaries have targeted commercial partner networks as a means of accessing and disrupting USTRANSCOM’s networks. He identified specific areas of risk to commercial networks.

The US maritime industry is not nearly as robust as it once was. During his keynote speech, Mr. Eric Ebeling, President & CEO, American Roll-on Roll-off Carrier Group, questioned whether or not we should be satisfied with this current state of affairs. 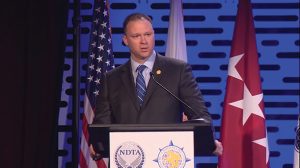 The concepts of contested environment, distributed maritime operations, and other related strategic imperatives are changing the geographic and temporal coverage required of logistics. Vessels may need to operate more independently—perhaps at risk in a contested physical or cyber environment, which may make the commercial fleet even more valuable in some respects, said Ebeling.

The distinction between these two fleets (organic and commercial) can be boiled down to the fact that the former has to be activated, often at great cost, while the commercial fleet is always active. The latter is a fleet-in-being, hiding in plain sight, deployed around the world, and available to call ports and provide intermodal services where DOD either doesn’t want to have a footprint or cannot otherwise access.

Strategic unpredictability, operational unpredictability, and ever-changing demand signals are commercial facts of life, that have made US-flag carriers more adaptable, including for DOD notions such as dynamic force employment.

The best of commercial industry is vibrant, can handle today’s workload, and has proven itself ready, willing and able to size itself to the DOD workload throughout history, said Mr. Ebeling. Carriers can and do compete like hell in the commercial and government market spaces, but there is an awesome willingness to put aside differences and work collaboratively with our DOD partners when the nation needs it.

Dr. Tim Mullaly, Chief Economist, FedEx, provided a keynote address to the audience that provided both short- and long-term forecasts for the US economy. “What determines the long-run,” he said, “are the decisions we make in the short run.”

The economy is structurally slowing down due primarily to reductions in productivity and the labor force. Unfortunately, the effects of this are often felt society-wide as fewer resources and investments.

Mullaly emphasized the need for the US to remain open and to be a champion for free trade. Trade, he said, increases productivity, and going back on trade is like using outdated technology.

The Fall Meeting serves as an invaluable opportunity for attendees to come together for education, discourse, and to build upon the many partnerships on which they depend. Find even more Fall Meeting coverage in the DTJ Online at www.ndtahq.com/defense-transportation-journal/, and mark your calendar for next year’s meeting 5-8 October in St. Louis.