New this week on www.ndtahq.com/covid-19-update/

National Transportation Week is this week, May 11-17, 2020, with Friday being National Defense Transportation Day. For the NDTA community, this has always been a time to come together to celebrate the hard work and contributions of those in the transportation industry. This year, the week holds new significance as the COVID-19 pandemic has thrust transportation workers into the spotlight and onto the front lines. […READ MORE…] 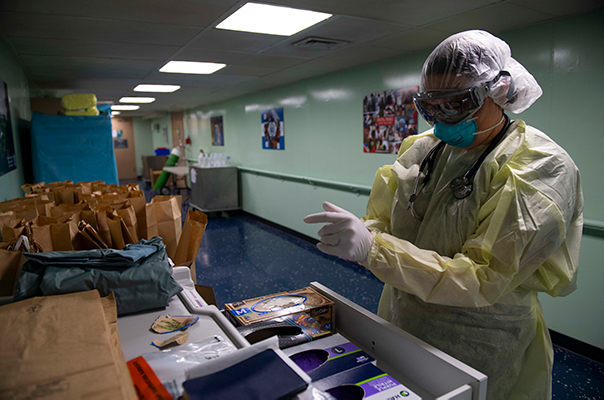 The agency that traditionally contributes to America’s military readiness with items like fuel and food has so far ordered over $920 million in lifesaving supplies and equipment to support the nation’s COVID-19 response.

“While DLA is a combat logistics support agency whose mission is to support our military services and combatant commands, its support to the whole of government during times of national crisis is indispensable,” he said of the agency. It manages about $42 billion in annual sales for the military services, 11 combatant commands, and 42 federal agencies, as well as partner and allied nations. […READ MORE…]

Innovative transportation technologies are being considered as a way to reduce reliance on single-occupancy vehicles on military bases. Doing so could help remedy the top transportation-related problem on installations—traffic congestion. This issue is especially problematic at the gate and has implications for readiness and security.  […READ MORE…]

Back to the Future: Wind Power Could Cut Shipping’s CO2 Emissions
(The Maritime Executive) As a significant contributor to greenhouse gas (GHG) emissions, the marine shipping industry is under significant pressure to meet ambitious carbon emission reductions of half the 2008 level by 2050. And the answer—as Bob Dylan famously sang—is blowing in the wind.

The Air Force’s Secret Space Plane Is Part of A Plan to One Day Shoot Microwaves to Earth
(Defense One) Little is known about the X-37B space plane and what, exactly, it’s been doing during missions that now total nearly eight years in orbit. But recently, the U.S. Air Force revealed some of the satellite payloads and experiments it will carry aloft this month, including one that will try converting the sun’s energy into a form that can be sent to Earth.

Amazon is Moving a Major Part of Its Air-Cargo Operations In-House, and It Could Be a Huge Blow to Airlines
(Business Insider) Amazon’s playbook in transportation has always been to work with partners and then mimic their services in-house—usually for much cheaper. Now, Amazon’s partners in air cargo are experiencing that.

The Pentagon Should Train for—and Not Just Talk About—Great-Power Competition
(War on the Rocks) The Pentagon has committed to competing with China and Russia—but it’s not training that way. If the United States is to be truly prepared for great-power competition, its forces need to train as they expect to operate in theater.

Virgin Orbit Gets Thumbs-Up for Space Force Launches From Guam
(C4ISRNet) VOX Space has received approval to launch payloads into orbit from Guam, the company announced May 7, and its first launch there will place experimental cubesats on orbit for various government agencies.

Atlas Air Revives Parked Freighters as Covid-19 Boosts Demand
(Air Cargo World) Atlas Air Worldwide has responded to increased airfreight demand over the last few months—a knock-on effect of the coronavirus pandemic—by bringing three of its Boeing 747 converted freighters, which had been parked, back into service.