Both of the US Navy’s hospital ships were activated and deployed in response to the COVID-19 virus pandemic. USNS Mercy (T-AH 19) and USNS Comfort (T-AH 20) have arrived and are providing medical support in two of America’s hard-hit metropolitan areas—Los Angeles and New York.

They are designed to treat large numbers of battlefield wounded personnel during combat, but they stand down between operations. When not deployed, they are maintained in reduced operating status, with Mercy in San Diego, California, and Comfort in Baltimore, Maryland.

The primary mission of the hospital ships is to provide an “afloat, mobile, acute surgical medical facility to the US military that is flexible, capable, and uniquely adaptable to support expeditionary warfare.” Their secondary mission is to “provide full hospital services to support US disaster relief and humanitarian operations worldwide.”

When deployed, the ships are operated by a crew of Military Sealift Command civil service mariners, with the clinical staffs coming from active duty and reserve medical officers and enlisted personnel—up to 1,000 Navy doctors, nurses, hospital corpsmen and other personnel.

Mercy and Comfort are former tankers, built during the 1970s and converted in the mid-1980s. They are getting old, and will need to be replaced.

There are a variety of options to replace the two large hospital ships. One is to procure two new ships, or convert existing vessels for the role, on a one-for-one basis. Or, more ships could be obtained with smaller capacity, such as four ships with 500 beds. A Common-Hull Auxiliary Multi-Mission Platform (CHAMP) was proposed to fulfill several missions, such as hospital ships, sealift, command and control ships, and submarine tenders. It now appears that the individual needs of those different missions mean the vessels wouldn’t have as much in common as hoped for, and that they may not be affordable. Existing platforms, such as the LPD 17 hull, the Expeditionary Staging Base (ESB), and the smaller EPF are also candidates, with proven designs and “hot production lines.”

Built by Austal USA, the 2,400-ton, 228-ton EPF can carry significant cargo—the equivalent to ten C-130 aircraft—and people at high speed. Instead of a 65-foot draft on a hospital ship, EPOF has a 15-foot draft, and can enter many more ports. The Navy has a number of EPFs in service now, and has ordered a 14th EPF to be configured as an expeditionary medical transport.

The US Maritime Administration (MARAD) is building the 19,300-ton National Security Multi-Mission Vessel (NSMV), to replace the training ships used by the US Merchant Marine Academy (USMMA) and the six state maritime academies. The new built-for-purpose NSMVs will also be able to support humanitarian assistance and disaster relief (HA/DR) with medical facilities and berthing for up to 1,000 first responders and recovery workers. MARAD contracted with TOTE Services, LLC in 2019 to be the vessel construction manager to deliver one to five NSMVs. Tote selected Philly Shipyard, Inc., of Philadelphia, Pennsylvania on April 8 to build the NSMV.

Although not a replacement for hospital ships, Crowley Maritime has proposed a new design and operating concept for medical support barges that could be towed to a port and support a crisis response such as the world is facing today. The large deck barges could have containerized living units installed to house support emergency response personnel.

With 1,000 beds they are capable of treating mass casualties, but have never been used to capacity. They have been deployed for natural disasters and have conducted theater security cooperation “influence operations,” such as Pacific Partnership, Africa Partnership Station, and Southern Partnership, where the medical staff mostly provided inoculations, minor surgery like cleft palates and dentistry.

According to Jerry Hendrix, a retired Captain and now Vice President of the Telemus Group, hospital ships visiting developing nations leave lasting impressions. “Hospital ships are a big part of influence operations. They can actually change the child mortality rates. You cannot put a price tag on it. They have a tremendous impact.”

“Maybe now is the moment,” Hendrix said, “because everyone in the chain of command from the president on down is recognizing the value of these ships.”

The Military Sealift Command hospital ship USNS Mercy (T-AH 19) arrives in Los Angeles, California, March 27, 2020. Mercy deployed in support of the nation’s COVID-19 response efforts, and will serve as a referral hospital for non-COVID-19 patients currently admitted to shore-based hospitals. This allows shore base hospitals to focus their efforts on COVID-19 cases. One of the Department of Defense’s missions is Defense Support of Civil Authorities. DOD is supporting the Federal Emergency Management Agency, the lead federal agency, as well as state, local and public health authorities in helping protect the health and safety of the American people. US Marine Corps photo by Cpl. Alexa M. Hernandez/Released. 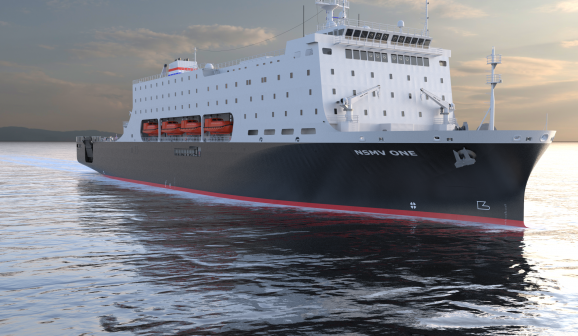 A rendering of the national security multi-mission vessel (NSMV) to replace aging maritime training ships. MARAD contracted with TOTE Services, LLC in 2019 to be the vessel construction manager to deliver one to five NSMVs. Tote selected Philly Shipyard, Inc., of Philadelphia, Pennsylvania on April 8 to build the NSMV.