History of the Foundation

The NDTA Foundation celebrated its 60th anniversary in 2021. Although part of NDTA, the Foundation operates as a separate 501(c)(3) corporate entity to raise and provide the funds needed to accomplish NDTA’s mission.

1The Foundation has its own Board of Trustees, which consists of NDTA’s:

The Early Years
During its first twenty years, the Foundation sponsored many different activities:

A New Focus
In 1983, the Foundation established an academic scholarship program. Its first award consisted of two $500 scholarships. The winners were William Pownell, President of the University of Maryland NDTA Student Chapter, and Alfredo Cavazos, Jr., a member of the San Antonio Chapter. Ever since, the Foundation has been awarding scholarships. As a result of generous contributions, judicious investments, surplus operating funds, and fundraising activities such as the Duck Races, golf tournaments, and 5K races, the value and number of scholarships has steadily increased. Since 2007, the Foundation has awarded over $530,000 in scholarships to 276 students.

Initially, scholarships were awarded to enrolled college students studying/majoring in the field of transportation. Qualifying fields of study were later expanded to include logistics, supply chain, physical distribution, and passenger travel services. The program was then opened to college-bound high school graduates interested in careers in these fields. In recent years, to address the needs of deployed personnel, the program was further expanded to include students enrolled in distance-learning college programs. 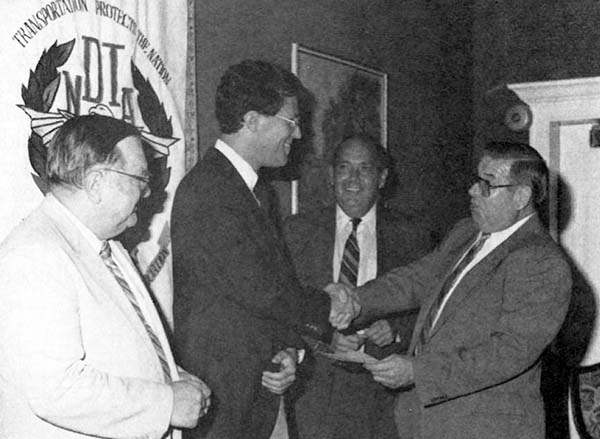 The Prosperous Years
The increased levels of defense spending, particularly over the early 2000s, afforded a high level of professional development activities such as conferences, tradeshows, training, and education, for DOD, military, and industry personnel. Like many industry associations, NDTA flourished. The Association’s conferences, such as the SDDC Training Symposium and the then-called Annual NDTA Forum and Exhibition, were well attended by participants and exhibitors. In fact, the Association was constantly setting attendance records at its conferences; which were held in cities across the US – as far as Alaska.

This prosperous environment was very beneficial to the Foundation and the Scholarship Program. The conferences provided the opportunity to hold fundraising events. Activities such as the Forum’s Duck Race, the Golf Tournament, Grand Price Raffle, and the 5K Run generated a substantial amount of money for scholarships. But of greater financial impact were the proceeds from conference registrations and exhibitors’ fees, a portion of which the NDTA national organization contributed to the Foundation. These monies made it possible to fund the scholarships without having to withdraw any money from the core scholarship fund (which consists of investments) and thus enabled it to continue to grow.

As a result, the Foundation has been able to increase the amount available for annual scholarships from $20,000 in 2007 to nearly $60,000 last year. The average annual scholarship award went up from $870 – which today might cover, at most, one semester’s worth of textbooks and a couple of fees – to $4,300. This increased funding has enabled the Foundation to achieve its goal of awarding scholarships that would make a significant, rather than just a token, contribution towards making college affordable for students.

The World Changes
Then, a confluence of events transformed our world…

First were the significant reductions in defense spending spurred by the burgeoning budget deficit and the drawdown of the US Armed Forces in Iraq. In August 2010, then-Defense Secretary Robert Gates announced an initiative to save $178 billion in defense spending over the next five years, of which $78 billion were outright spending cuts. Eight months later, President Obama mandated an additional $400 billion in cuts over the next 12 years. Then, in early 2013, came the event nobody expected would happen: budget sequestration. The Budget Control Act of 2011 automatic spending cuts, enacted March 1, 2013, reduced Defense spending by $454 billion between 2013 and 2021.

Within DOD and the Services, non-mission-critical expenditures such as professional development, training, and non-essential travel were slashed – eliminated in most cases. Funding for attending conferences disappeared. On the industry side, the cuts resulted in the cancellation of numerous multi-billion dollar weapon systems and contractor services contracts. This, in turn, led to the loss of a large number of jobs and severe belt-tightening in companies’ budgets for conferences, tradeshows, and professional development.

To compound the problem, a scandal involving extravagant spending at a General Services Administration conference in 2011 resulted in a Government-wide clampdown on conference participation. This development, by itself, had a significant chilling effect on conference programs and attendance. With the exception of end-of-day networking receptions, social and fundraising activities disappeared from conference programs.

The impact of all these events was that, almost overnight, attendance of Defense and civilian Government personnel to industry conferences vaporized and participation by industry, particularly exhibitors, dramatically decreased. Many conferences, including the NDTA annual meeting, were canceled in 2013. Industry associations lost hundreds of thousands of dollars in non-refundable deposits.

The Way Forward
What is clear is that, more than ever, the Foundation and the Scholarship Program are going to need much support from our members. This is a very important program that helps our next generation of leaders afford a college education without having to mortgage their future with debt. If you have never contributed to the Foundation, this is a great time to start. If you have been a past donor: thank you and, if it’s possible for you, please consider an increase in your contribution.

The Foundation also accepts donations in forms of securities. Please contact the office at 703-751-5011 for additional information. Your contributions are tax-deductible.

1 In 1968, the Foundation was brought under the NDTA structure though it still operates as a separate non-profit entity.

As the Foundation is funded by voluntary donations, with your support, the Foundation will be empowered to help students for decades to come. Please consider making a tax-deductible contribution to help our future professionals have a future.

MAKE AN IMPACT WITH NDTA